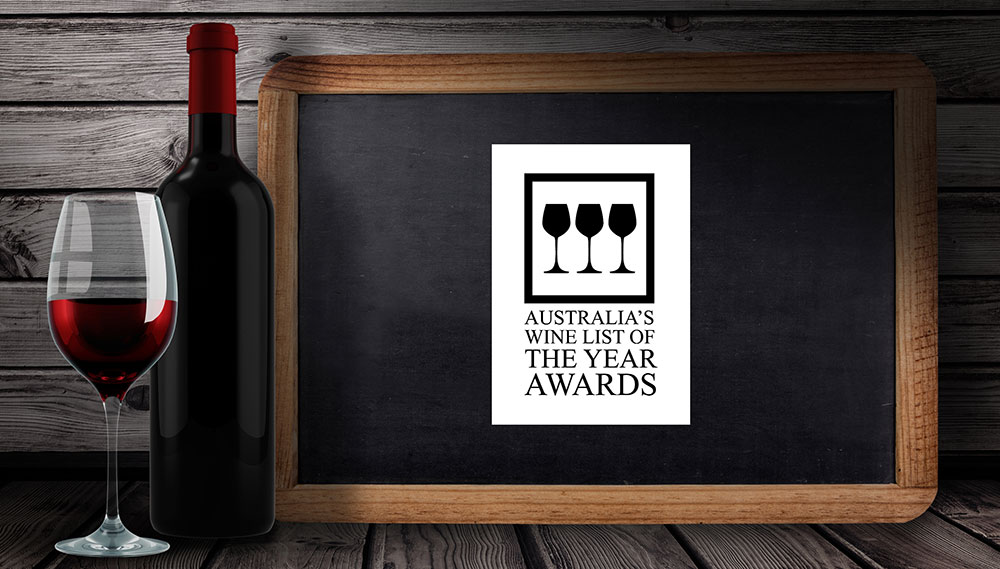 Now recognised as one of the hospitality and tourism Industry’s most prestigious Award Programs, Australia’s Wine List of the Year Awards, were established in 1994, and their 2016 presenting partners – award-winning wine magazine Gourmet Traveller WINE, and the Australian Liquour Industry’s the drinks Association, are delighted to again together present these benchmark Awards in this their 23rd year.

From the outlet’s point of view – to quote 2015 Winner – Nick Hildebrant – Bentley. “It’s been really good for business. We’ve always been known as a destination for wine lovers and the Award has now cemented that position for us. We’ve had customers come in to see the wine list and drink the wines because they’ve heard about the Award and that definitely adds something special to the place”.

In addition – to quote 2013 Winner – Daniel Wegener, formerly Group Sommelier at Print Hall in Perth, – “The Awards are not only good for attracting customers, they are the greatest driver for sommeliers to continually evolve and improve their wine lists. Just submitting for the Awards is an exercise in improving your business. We have many European professionals working with us and they are all so impressed by the great lists of Australia compared to their restaurants back home”.

According to Editor, Judy Sarris “ the team at Gourmet Traveller WINE magazine are again looking forward to receiving the same high calibre of entries as in past years, and from all manner of venues including everything from small wine bars to fine dining restaurants.” Gourmet Traveller WINE, the Award’s Media Partner, is Australia’s leading magazine on the world of wine and is now read by more than 150,000 people. It celebrates both the local and overseas wine scenes. In the last decade Gourmet Traveller WINE has three times been awarded the prestigious Gold Ladle at the World Food Media Awards for “Best Drink Magazine in the World”. Many of the magazine’s experienced team of writers also judge the Awards.

“The drinks Association, now in its 117th year, is a not-for-profit organisation representing all companies wholesaling wines, beers, spirits, RTD’s and ciders in Australia, is pleased to be the official Trade Communications Partner of the 2016 Australian Wine List of the Year Awards. Our well-respected portfolio of trade publications covers an extensive cross-section of the on-premise drinks community – in excess of 10,000 restaurants, hotels and clubs, and we look forward to working with Australia’s Wine List of the Year Awards to help deliver yet another successful Awards program for 2016” – commented Sandra Przibilla, CEO, the drinks Association.

According to Australia’s Wine List of the Year Awards founder Rob Hirst, Chairman of Fine Wine Partners – “the combination of our valuable long term Media Partner – Gourmet Traveller WINE and the drinks Association – the pre-eminent supplier of information and services to the Australian Liquor Industry, is an ideal one and it is great to also see with the entries each year now the growing focus on – Wines by the Glass, Food and Wine Matching and Regional recognition!”

Australia’s Wine List of the Year Awards has again assembled an extraordinary selection of outstanding local and international judges to maintain the integrity and independence of the Awards. Headed by leading wine commentator Peter Forrestal as Chairman of Judges, the long-term panel of 30 includes industry figures such as Brian Julyan MS – founder and CEO The Court of Master Sommeliers Europe, former global wine Man of the Year and world Champion Sommelier – Gerard Basset MBE, MW MS MBA, from the USA – Evan Goldstein MS, from France James Lawther MW and Andrew Jefford, from Germany Felicity Carter, from New Zealand – Bob Campbell MW and Cameron Douglas MS, plus from Australia – Toni Paterson MW, Jeni Port, Andrew Caillard MW, Huon Hooke, Mike Bennie and Peter Bourne to name but a few, together with former Wine List of the Year Award Winners and representatives of Sommeliers Australia.

This panel reviews the wine lists for many qualities, which include user friendliness, the quality of the wines and how well the list fits the style of the venue – see Judging Criteria at www.winelistoftheyear.com.au.

Again in 2016, Wine Australia will continue to promote local producers with their sponsorship of the Award for the ‘Best Listing of Australian Wines.’

Results will be published in the Aug/Sept 2016 issues of both Gourmet Traveller WINE magazine and the Drinks Trade magazine and all venues that receive one-, two- or threeglass ratings will all be awarded Certificates as well as feature on gourmettravellerwine.com and on GT WINE’s tablet and iPhone apps.

The drinks association is the AWLOTYA's official Trade Communications Partner. It's Australia's leading membership body providing services and information to the drinks industry, with a well-respected portfolio of trade publications targeting an extensive cross-section of the on-premise drinks community – in excess of 13,000 restaurants, clubs, pubs, hotels, resorts, bars and wine bars.