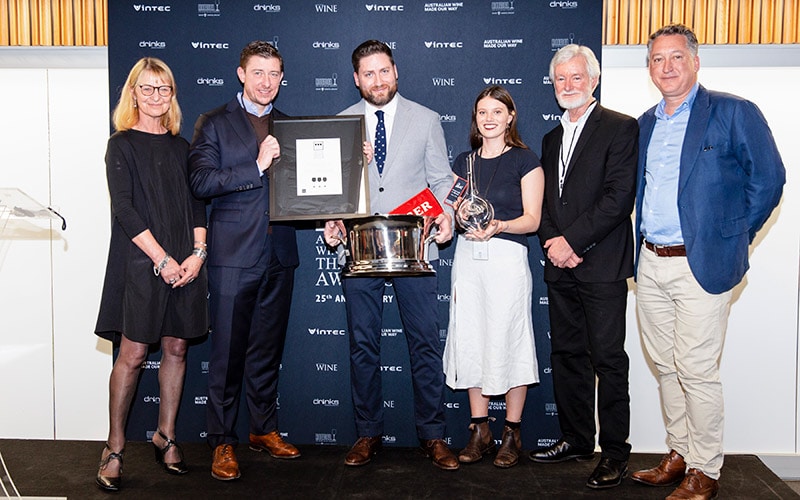 Australia’s Wine List of the Year Awards 2018 has revealed the Best Wine List in Australia can be found at Aria, Brisbane. This is a major victory for Queensland, the first time in the awards 25 year history that a Queensland restaurant has won this prestigious national accolade. As the sommelier responsible for the winning list, Ian Trinkle receives the Judy Hirst Award, presented in memory of the inspirational woman who helped found and establish the awards 25 years ago.

Co-chairman of Judges Peter Forrestal, was delighted to see the major award go to the Sunshine State. “This is further confirmation that Brisbane restaurants can mix it with the best in the country. Since it opened in 2009, the Aria list while similar in style and structure to its Sydney sibling, gives unique support to the fledging Queensland industry as well as highlighting the best Australia has to offer. Like few others, it balances the cutting edge and the established; embracing new trends while celebrating old favourites. Thoughtful curating has gradually refined an outstanding list which has morphed into Australia’s finest in 2018,” says Forrestal.

Much-admired Melbourne sommelier David Lawler, who created the 2010 Best Wine List of the Year at Rockpool, Melbourne and recently retired as President of Sommeliers Australia was awarded the rarely-given Individual Award with entry into the Hall of Fame for his passionate commitment to the hospitality industry – supporting the education, training and service skills of sommeliers.

First launched in 1993, by Rob Hirst and Tucker Seabrook, Australia’s Wine List of the Year Awards were created to recognise and reward the hard work and talent of sommeliers as well as the enormous investment in time and resources by business owners to develop quality wine lists and cellars. The first winner in 1994 was Peter and Beverley Doyle’s Sydney restaurant Cicada.

According to Rob Hirst, 2018 saw a record number of entries in the awards with a record also 325 dining establishments including restaurants, clubs, pubs, hotels and wine bars achieving the higher glass rankings of two glasses (excellent) or three glasses (outstanding). “The most popular award category in 2018 remains Best Wine By the Glass – the perfect vehicle for introducing premium wines to the consumer, followed again by Best Matching of Food and Wine – reflecting again the ever closer liaison between sommeliers and chefs. These categories were closely followed in popularity by Best Listing of a Regions Wines and Best Listing of Australian Wines – showing the increased interest and desire by both sommeliers and consumers to explore the wines of different regions including the exciting things happening with Australian wines today,” says Hirst.

Awards partner for the last decade, Judy Sarris, Editor of Gourmet Traveller WINE finds it hard to believe that the Wine List of the Year Awards are now in their 25th year. “One of our annual highlights now is celebrating and showcasing the skills of our talented sommeliers across the nation. The venues that scooped up the gongs are most definitely THE places to head for an exciting glass or two and some vinous experimentation. Congratulations to them all,” said Judy Sarris

“The Drinks Association is thrilled to celebrate the 25th anniversary of the launch of Australia’s Wine List of the Year,” said CEO Georgia Lennon. “We look forward to promoting the winners in our premier publication, Drinks Trade magazine, the Trade Communications Partner of the event.  Keeping Australia’s on and off-trade informed is key to Drinks Trade’s success and these awards are a valuable acknowledgement of the achievements of Australia’s sommeliers and their employers. Congratulations to all the winners.”

Australia’s Wine List of the Year Awards once again would like to acknowledge the important support of Riedel glassware, Vintec and Transtherm wine cabinets and Wine Australia as well as all supporters who make the awards possible.

Winners will be listed at winelistoftheyear.com.au and gourmettravellerwine.com on July 23rd and published in the Aug/Sept 2018 Gourmet Traveller WINE magazine-on sale July 25th.

FOR INTERVIEWS AND FURTHER INFORMATION, PLUS PICTURES PLEASE CONTACT –