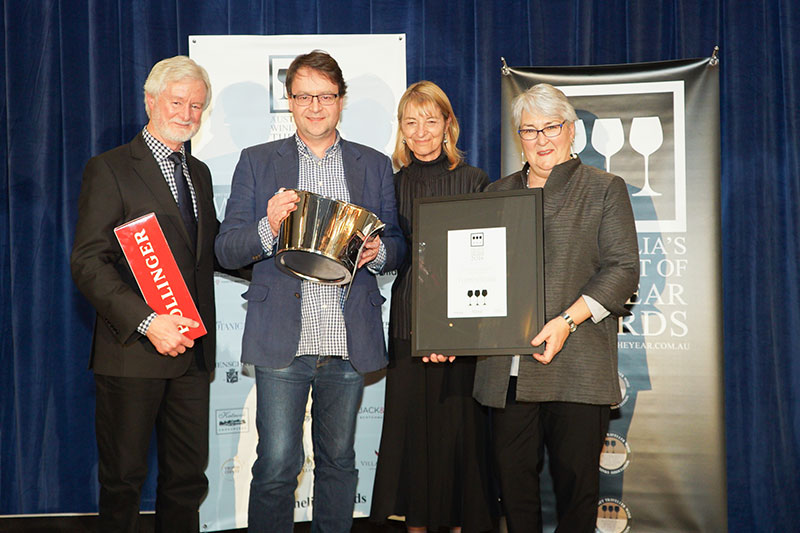 Presenting partners, Gourmet Traveller WINE and the Australian Liquor Industry’s the drinks Association today announced fermentAsian in Tanunda, South Australia as winner of the prestigious Australia’s Wine List of the Year for 2016.

‘fermentAsian’s remarkable list has struck a chord with the judges (domestically and Internationally), perhaps in much the same way that it has charmed those who have flocked to this restaurant in the small Barossa village of Tanunda over the past five years’, commented Chairman of Judges, Peter Forrestal. As the sommelier responsible for the winning list, Grant Dickson also receives the Judy Hirst Award, presented in memory of the inspirational woman who helped establish these awards.

‘Judy Hirst would have loved the unlikely scenario of a musician taking on the role of sommelier and restaurant manager and growing a list organically. Grant Dickson is a musician who combines an ear for poetry, a penchant for wine history and a delight in sourcing the obscure and improbable: and producing a commentary on the wines which breathes life into an extraordinary list’, added Peter Forrestal.

Two years ago, Victoria seemed to dominate these awards. Since then, New South Wales has lifted its rating and there is a much more even spread of stunning wine lists across the country. Not only is South Australia delighting in its most stellar achievement, but also the number of three glass lists in the State, per capita, arguably leads the nation. The State / Territory winners this year were – Rubicon (ACT) and fermentAsian (SA) for the third time; Jonah’s (NSW) and Lalla Rookh Wine Store (WA) for the second time; and the Botanical (Vic), Stokehouse Q (Qld) and Stillwater (Tasmania) for the first time.

Established in 1994, to recognise and reward Australia’s best Wine Lists and the individuals and establishments behind them, Australia’s Wine List of the Year Awards has an outstanding panel of local and international expert judges to maintain absolute integrity and independence – plus add a global perspective.

The increased sophistication of the Australian dining scene is reflected in this year’s results with again more establishments entering the Awards and also with a record number of clubs, pubs, hotels and wine bars achieving either a two or three glass rating (72%).

Australia’s Wine List of the Year Awards founder Rob Hirst, Chairman of Fine Wine Partners, thanked sincerely Award Partners – Gourmet Traveller WINE and the drinks Association for their on-going support of the Awards and congratulated all entrants on the quality of this year’s lists – commenting that “The most popular award category remains Best Wine By the Glass – the perfect vehicle for introducing premium wines to the consumer, followed by Best Matching of Food and Wine – reflecting the even closer liaison now occurring between sommeliers and chefs.”

Judy Sarris, Editor, Gourmet Traveller WINE added – “ Australian sommeliers continue to address the everevolving landscape of wine with talent and finesse. While organic, biodynamic and natural wines seem to have taken a stronger hold on lists than ever before, some of the most ferocious competition is to be found in the ever-expanding and improving by-the-glass lists – which can only be a bonus for the adventurous or the curious.”

Sandra Przibilla, CEO, the drinks Association said, “Congratulations to the winners of the Australian Wine List of the Year Awards 2016. We are proud to be Trade Communications Partner for the awards and look forward to celebrating and promoting the winners through our trade publications and social media network. It is an honour to raise a glass to you all at the awards ceremony tonight.”

For interviews and further information, plus pictures, please contact

Presented by Gourmet Traveller WINE and the drinks association

Two years ago, Victoria seemed to dominate these awards. Since then, New South Wales has lifted its rating and there is a much more even spread of stunning wine lists across the country. Not only is South Australia delighting in its most stellar achievement, the number of three glass lists, per capita, arguably leads the nation. State / Territory winners were Rubicon (ACT) and fermentAsian (SA) for the third time; Jonah’s (NSW) and Lalla Rookh Wine Store (WA) for the second time; and the Botannical (Vic), Stokehouse (Qld) and Stillwater (Tasmania) for the first time.

New South Wales celebrates Jonah’s with its best ever list earning Best Hotel Restaurant List; a revitalised Est wining Best City Restaurant List; Upstairs at the Lord Nelson, the Best Pub Restaurant List; and the sublime Love Tilly Devine redefines the notion of what a Best Wine Bar List could look like. Don’t take the word of our Gourmet Traveller Wine readers who voted for the CBD’s Hubert as their favourite. Just go and find out for yourself. Two outstanding newcomers head the list for Best New Restaurant List – Silvereye and Bennelong. Both offer new ways of defining classy dining in the Harbour City with Silvereye taking out the Award. And the CBD Club, Queens, took out the Best Club List for the first time.

No award is tougher than Best List of Wine by the Glass: here, Amanda Yallop and her talented team indicate another strong reason for Quay’s popularity. Proving that it’s impossible to restrain an outstanding sommelier, third time winners in Victoria are Merricote’s Bronwyn Kaboord with Best Small List (50), and David Lawler of Spice Temple (Melbourne) with Best Small List (100). Kabir Antoniak at MONA’s The Source (Tas) defies the challengers for Best Beer List in consecutive years.

Victoria provides the winner of two of the most keenly fought awards. Best Food & Wine Matching going to the stellar Beechworth restaurant, Provenance, with sommelier, Damien Moylan being challenged to match chef Michael Ryan’s knowledge, skill and daring. Best Listing of a Region’s wines is the third area in which Michael Kennedy’s Healesville Hotel has excelled alongside its Hall of Fame Status for Best Pub Restaurant List and Best Beer List. A remarkable feat. Both Apothecary 1878 (SA) and Sepia (NSW) have shone over several years and it’s no surprise to see their continued success with wins in Best Aperitif List and Best Digestif List respectively.

The resurgence in interest of Australian wines in the past few years is demonstrated by the dilemma faced by the judges with Best Listing of Australian Wines: while Altitude was a worthy winner there was scarcely a hair’s breadth between the outstanding top four lists. The new awards – for Best Listing of the wines of New South Wales, Victoria, South Australia, Tasmania and Western Australia – show the strength of the country’s regional lists and introduces new winners: Biota Dining (NSW), The Grill at the Stirling Hotel (SA) and Fraser’s (WA).

Pipers Brook Vineyard has been producing exceptional cool-climate wines on the north coast of Tasmania since 1974. The combination of the unique geography of our pioneering sites, temperate climate and proximity to the Bass Straight allows us to capture the purity of Tasmania in our unique, award-winning wines. All our products are estate grown and bottled, so whether it be our world class bottle-fermented sparkling, or stylish table wines, Pipers Brook only offers the highest quality to those of discerning taste.