Jonah’s Restaurant , Whale Beach NSW and their sommeliers, Niels Sluiman and Christian Baeppler, are the winners of Australia’s Wine List of the Year 2017. 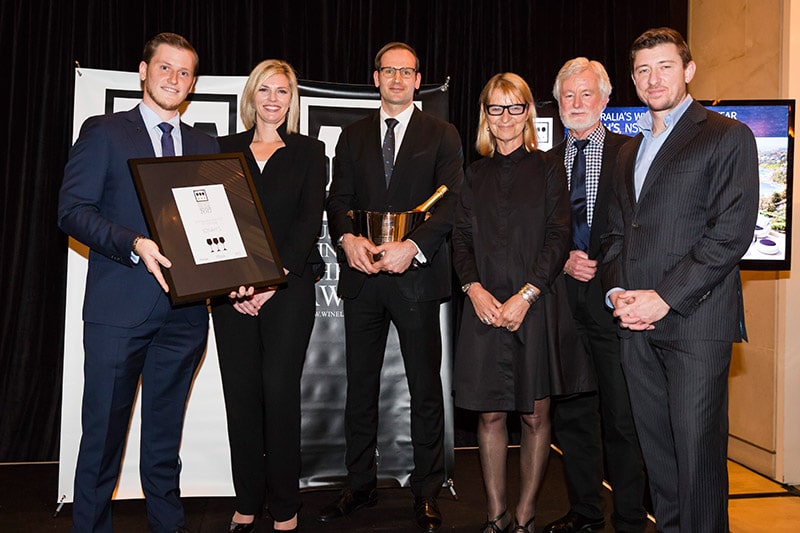 “Persistence has certainly paid off for the sommeliers at Jonah’s with their win in the 2017 Australia’s Wine List of the Year. Over the past few years, Jonah’s has refined a massive cellar into an approachable list which offers a diverse range of Australia’s best with classy wines from all corners of the globe. Their focus at home and abroad is on offering depth from classic wine regions while not neglecting emerging regions and cutting edge producers. Jonah’s offers an amazing array of wines by the glass, rieslings to satisfy the fussiest palate, verticals to amaze… And there’s those spectacular views of Whale Beach for the quiet moments.” commented Chairman of Judges, Peter Forrestal.

As the Sommeliers Responsible for the Winning List, Niels Sluiman and Christian Baeppler also receive the Judy Hirst Award, presented in memory of the inspirational woman who helped found and establish these awards.

“Australia’s Wine List of the Year continues to play its part in transforming the dining scene in this country. The use of Coravin plus added support from wineries has dramatically increased the possibilities of wines by the glass, so that this award is one of the most hotly contested in the annual awards. The interest of consumers in regionality has prompted awards acknowledging the Best Listing of the wines of each state. This interest can also be seen in the emergence of a greater number of smaller (often regionally-based) lists of impressive quality. The Awards continue to focus attention on the best lists around a country that has a vibrant wine scene.” added Peter Forrestal.

Tucker Seabrook established Australia’s Wine List of the Year Awards in 1994 to recognise and reward the enormous investment by owners in time, skill and resources that go into developing the best quality wine lists and to also recognise and reward the dedicated and talented sommeliers creating those lists for Australia’s restaurants, hotels, clubs, wine bars, pubs, cafes and brasseries – large and small. To maintain the absolute integrity and independence of the Awards – plus add a global perspective, an outstanding panel of local and international expert judges has been assembled over the years.

The sophistication of the Australian wining and dining scene continues to grow and is reflected in this year’s results with again a record number of clubs, pubs, hotels and wine bars achieving the highest levels – either a two or three glass rating. The growth in participation over recent years of the nation’s Hotels, Pubs and Wine Bars is also good to see.

Australia’s Wine List of the Year Awards founder Rob Hirst, thanked sincerely Award Partners – Gourmet Traveller WINE and the drinks Association and all Sponsors for their on-going support of the Awards and congratulated all entrants on the quality of this year’s lists – commenting that “The most popular award category this year remains Best Wine By the Glass – the perfect vehicle for introducing premium wines to the consumer, followed again by Best Matching of Food and Wine – reflecting again the ever closer liaison now occurring between sommeliers and chefs. These categories were closely followed in popularity this year by Best Listing of a Regions Wines and Best Listing of Australian Wines – again pointers to the increased awareness and appreciation of the regionality of all wine – with both the trade and the consumer, and the special nature of what Australian wine now has to offer.”

“It’s always a joy to visit a bar or restaurant that gets wine service right. A place where all the vintages on a well-thought out list are served in quality stemware, and at the correct temperature,” said Judy Sarris, Editor of Gourmet Traveller WINE. “To encourage and celebrate excellence we relish the opportunity to acknowledge this country’s finest sommeliers through our partnership with Australia’s Wine List of the Year Awards. Bravo to all who won top gongs and are showcased in the latest issue of Gourmet Traveller WINE – as well the many who achieved glass ratings and are there for the world to see on our digital platforms.”

“drinks trade magazine is proud to be the Trade Communications Partner for AWLOTYA,” said Sandra Przibilla, CEO of the drinks association, publisher of drinks trade. “It has been rewarding to see AWLOTYA evolve and grow over the past 23 years. These prestigious awards not only pay tribute to the achievements of the drinks trade, but encourage them to continue developing their skills. We believe the more educated and informed the trade is, the better quality service and experience they can provide to their customers. Congratulations to all the winning venues, we look forward to celebrating and promoting your achievements in our digital and print publications.”

Winners will be listed at winelistoftheyear.com.au and at gourmettravellerwine.com on July 31st and via Aug/Sept 2017 Gourmet Traveller WINE magazine – on sale August 2nd. Full results and entrant reviews will be available via the Gourmet Traveller WINE digital edition at gourmettravellerwine.com and at winelistoftheyear.com.au

FOR INTERVIEWS AND FURTHER INFORMATION, PLUS PICTURES PLEASE CONTACT

In partnership with Gourmet Traveller WINE and the drinks association

National Class of Trade or Category

Qantas magazine and Travel Insider, an official partner of the AWLOTY Awards, is the leading destination for travel content in Australia. It is not only a celebration of travel and all that it offers but also an insider’s guide to the best experiences in Australia and overseas. The partnership with AWLOTY is an opportunity to recognise Australia’s best wine lists and share the restaurants that are excelling with a very premium audience.